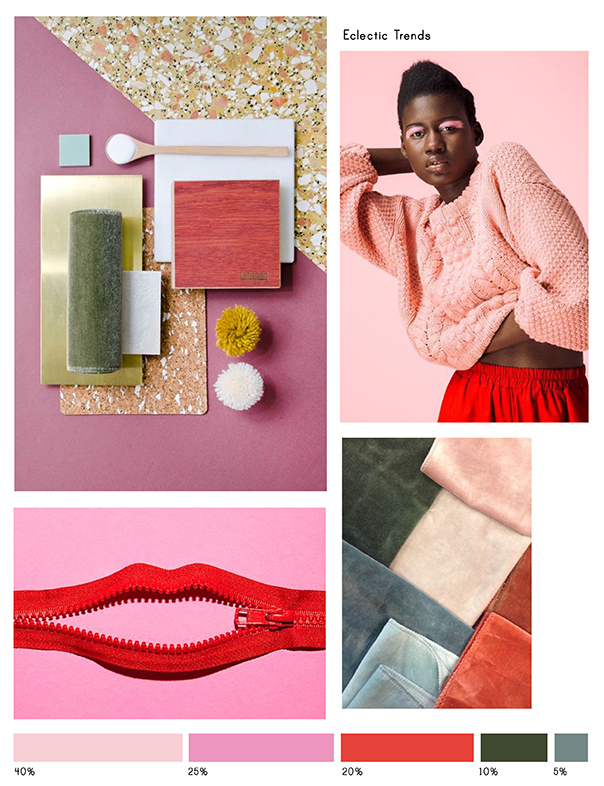 Color Inspiration No.14 is all about the fascinating mix of red and pinks. Though we were not very used to see these two colors together until now, they’re actually considered a harmonious scheme since red mixed with white actually becomes rosé. The result of mixed colors combined with the initial color is considered a good choice.

Crepe, Rose, Scarlet, Seaweed and Stone make a wonderful mix for interiors, fashion, food styling, textiles and graphic design. And I am sure there are a few other disciplines that could benefit from this cheerful mix toned down with a couple of more muted colors such as Seaweed and Stone.

Scarlet was made back in the fifteenth century out of kermes dye. Making a single gram of this precious and brilliant red required the bodies up to 80 female kermes beetles imported from Southern Europe. It became a very expensive  dye and needed precise skills to get the right tone. The finished product applied to cloth became the epitome of luxury. And where wealth goes, power followed soon.

Worn by Kings at the beginning, the Scarlet cloth became inextricably linked with Church, knowing that Purple was already hard to get due to the scarcity of Tyrian purple sea snails. These had been harvested producing a labour intensive dye that involved tens of thousands of snails for a few grams, and were almost extinguished.

If you are fan of pink and the current trending total look seen in different disciples, you might be interested in this trend review.